VI century before the birth of Christ

In ancient times, today's lands of Bulgaria were inhabited by Thracians. They were divided into numerous tribes and approximately 480 years before the birth of Christ was United by King Teres in Odrinska Kingdom, whose rise came during a control Chitalka and Cotys I. Thrace was conquered by Philip III of Macedon and his son Alexander the Great, returned she their independence during the time of Sevt III. In the III century BC in the Thracian lands there was Keltskie Kingdom, whose capital was Tillis (currently, Body is in near the town of Kazanlak in Central Bulgaria). In the second, Vicedo the birth of Christ, the Romans came to the Thracian lands and the war continued to 46d., when Thrace became a Roman province. Despite the fact that trucks are not left written evidence of their legacy was preserved in the numerous tombs, and treasures opened uitelnyy human civilization that was more developed from (savage and bloodthirsty warriors). In Bulgaria there are over 60,000 graves in which about 2,000 unexplored archaeological sites. Some of the most significant Thracian monuments were tombs in Kazanlak and Sveshtari, Staroselski the mausoleum, the capital city of Sevtopolis and the temple Tatuli and Perperikon. More than 80 Thracian treasures and the famous Panagyurishte treasure was found in the Bulgarian lands. The oldest Golden treasure in the world - Varna is considered, a large number of artifacts including the Golden mask of King teres were found in the valley Rossendale Bulgaria. It is believed that the ancient Bulgarians are of mixed origin: it was originally East Iranian, and later the Finno-Ugric. They came to Europe from their old homeland Hindukush, North of Afghanistan, and built his "stone city" in the North Caucasus. Early Bulgarian Kingdom was founded Europe Khan Avitohol in 165g. Prior to this, some Bulgarians migrated from the Caucasus to Armenia and founded the Principality of Vanand, leaving centuries of documented presence in Armenian history. In IV-VII century the Bulgarians attacked in Central and Eastern Europe and were known as fearless warriors who respect law and justice. In 632г. Khan Kubrat United the majority of the Bulgarian lands from the Alps to the West the independent Kingdom of Great Bulgaria. The Eastern Roman Empire recognized the new Kingdom in 635г. The successor of Khan Kubrat, Khan Asparuh expanded Great Bulgaria on the Balkan Peninsula, conquering the Byzantine territories. The signing of a peace Treaty with Byzantium in 681г. and the creation of the new capital of Pliska was considered the beginning of the First Bulgarian Kingdom.

Great Bulgaria - a state that existed in the VII century. It appeared after the departure of the Avars in Pannonia and the weakening of the Turkic khanate, which is due to the internal turmoil lost control of their Western possessions. The result of the Bulgarian tribes were United under the rule of Khan Kubrat. In 632, he declared independence from the Avars and stood at the head of the Association, received in Byzantine sources the name Great Bulgaria. About 634-641 Kubrat has entered into a friendly Alliance with the Byzantine Emperor Heraclius. After the death of Kubrat (665г.), his Empire collapsed because it was divided among his numerous sons. The first Bulgarian Kingdom existed from 681 at 1018г. After the disintegration of great Bulgaria of its land was in the territory of Ukraine, one of which was led by Asparukh, Kuber and another.After Khan Asparuh conquered the victory over one of the armies of Emperor Constantine IV, the head of the Byzantine Empire made an agreement between the Khan Asparukh and the Byzantine Emperor. In accordance with this agreement - Bulgarians and Slavs get most of the territory between Stara Planina and the Danube river. In the management of Khan Krum( 803 - 814), Bulgaria is growing to the South - East, inhabiting the territory of today's Sofia 811г. and Odrin 813г. Khan Omurtag (814-831г.) continued administrative repomo Krum: divided the country into regions. Prince Boris I Mihail (852-889) converted to Christianity as the official religion. Those who do not want to accept the new religion were persecuted and destroyed. Knyaz Boris I combines proto-Bulgarians and Slavs, who at that time had corenno different religions. The Bulgarians get the right to Archdiocesan Church. Boris takes of the disciples of Cyril and Methodius, Clement, Naum and Angelariy in Bulgaria. So a new alphabet (Glagolitic) from the brothers Cyril and Methodius came to the Bulgarian lands somewhere in 886g. In the early 10th century a new alphabet, called Cyrillic, based on Greek alphabet and Glagolitic. Later, the son of Prince Boris I, Simeon 893-927г. took the title of Tsar of the Bulgarians, and the Emperor of Bulgarians and Greeks. The title of Emperor was recognized by the Pope but not by the Byzantine Emperor. Tsar Simeon I was educated in Constantinople, he built many book centers in the whole of Bulgaria. Simeon I becomes a serious threat to the Byzantine Empire. After many military successes set itself the goal - to capture Constantinople. Is proclaimed Emperor. After the death of Simeon I the power of Bulgaria considerably weakened. Appears Bogomoltsa. The country is ruled by king Peter I, there is seclusion. He is the most Dolgoprudny Bulgarian ruler, in the beginning of his reign he made a peace Treaty with Byzantium, but after the end of the war began with the Greek state. During the reign of Tsar Samuel of the Bulgarians losing battle Basil II, who kills thousands and orders the blinding of 14,000 prisoners. This action Byzantine Emperor was called algarobius. When king Samuel sees blinded people dying. With 1018, a state conquered by the Byzantine Empire, on the throne of the rules of Tsar Ivan Vladislav. That was the end of the First Bulgarian Kingdom. In 1186 the uprising, which led biliari brothers Asen and Peter threw back the power of Byzantium. Created the Second Bulgarian Kingdom, the capital is the city of Tarnovo. With 1186 original country is ruled by Assen, and after – Peter. In the twelfth century the Bulgarian Kingdom becomes stronger blagodarya the military successes of Tsar Kaloyan. During the reign of Tsar Ivan Asen the Second 1218-1241 Second Bulgarian Kingdom reached the enormous dawn – expanded borders to the Black sea, the White sea and the Adriatic sea, a developing economy and culture. In 1235г. the head of the Bulgarian Church received the title Patriarch. С1241-1280г. in Bulgaria happen the invasion of the Tatars, the decline during the reign of Constantine, the uprising of Ivaylo. In XIV there is a growing desire boleros to break away from Central government. Bulgaria is divided among the heirs on Ternovskoe and Vidin Kingdom in 1371. Naturally, this Kingdom is weak, made him easy prey for the conquerors and in 1396г. it was conquered by the Ottoman Empire and continued almost five centuries Bulgaria was under her slavery. 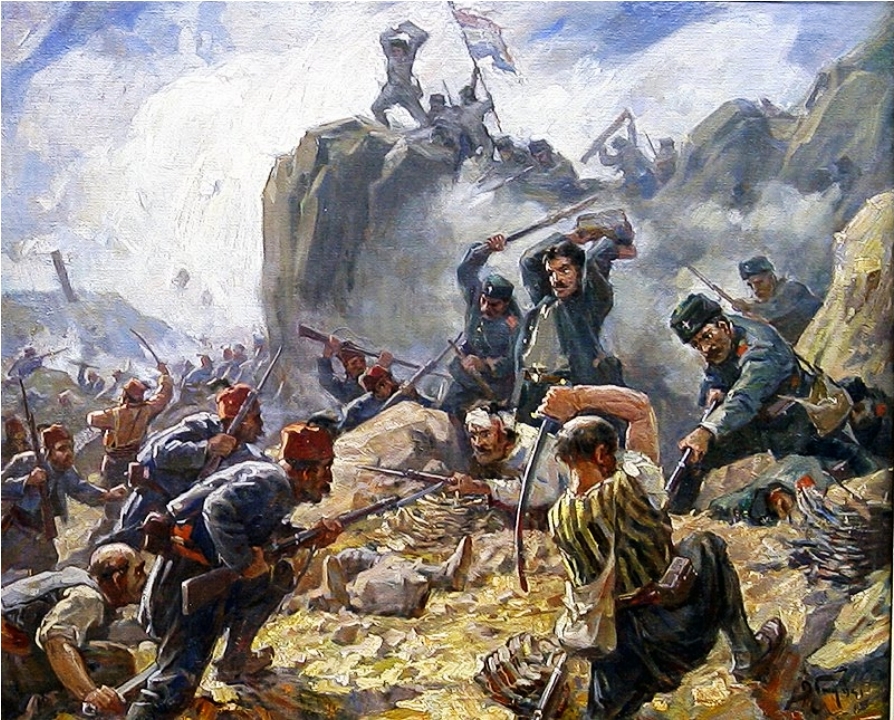 XV-XVII century is associated with the failed experiments to free themselves from the Ottoman power. In the XVIII century begins the Bulgarian Revival associated with vivid names such as Paisii Hilendarski, Sophronius of Vratsa and. Resume experiences liberation uprising in Western Bulgaria during the war the Ottoman Empire with Russia and Austria from 1768 to 1774. and the Russian-Turkish war. In the XIX century began the development of educational culture. During the Crimean war was created by a Secret society and Virtuous group. April 3, 1860. Hilarion Makariopolski announced the separation of the Bulgarian Church from the Universe of the Patriarchate in Istanbul, which was subordinated. 27 Feb 1870. the Sultan signs the message for the formation of the Bulgarian Exarchate and the Exarchate in 1872 was chosen Antim I. G. S. Rakovski in 1860-1878, was founded in secret Central Bulgarian Committee. Lyuben Karavelov, Hristo Botev and Vasil Levski create the Bulgarian revolutionary Committee. In 1877. 12 April began the Russian-Turkish liberation war, which ended January 19, 1878. in which Russia won.

The third Bulgarian Empire has its origin with Sansepolcro peace Treaty, which was signed on 3 March 1878. This agreement restores the ethnic borders of Bulgaria, it is a special international Commission of the Great powers – Germany,England, France, Austro-Ungaria and Russia. This happens in the so-called Berlin Congress, which defiles the interests of all the Bulgarian countries. It creates a number of issues, turning the Balkans into the "powder keg" of Europe.

Here begins the process designated international term - Balkanization.” That's why the saying "Balkanization" is not considered the fruit of the mentality of the Bulgarian people and States, as a direct result of the self-will of the Great powers. In accordance with the decision of the Berlin Congress - on the territory of Moesia and Sofia emerged a princedom of Bulgaria. South Bulgaria was declared an Autonomous region, the name Eastern Rumelia. Macedonia remained within the Ottoman Empire. Before the Second world war, the unification of the Bulgarian people was the domination of domestic and foreign policy of the Bulgarian state. Bulgaria could regain southern Bulgaria without the shedding of blood in 1885. and part of Macedonia after the Balkan carnage from 1912 to 1913. Non-existent ideal of national unification determined the accession of Bulgaria to the Central powers in the First and Second world wars. Dreams about Macedonia (tearing blocked between Greece and Serbia) that are alive to this day paid two uprisings and four wars. Official Bulgaria, like its the General public, accept the present reality for what it is. The national question of the Bulgarians solved in the ideal of a United Europe.